After decades of unjust persecution, the magic mushroom is emerging back into society. If you’ve read or watched recent news on mycology (the scientific study of fungi), one name is bound to have come up

Stamets “The Mushroom Man” has been a driving force in freeing the mushroom. His groundbreaking research and outspoken advocacy for the medicinal and ecological benefits of mushrooms is changing the way the world views fungi.

From pollution to mental health, pest control to cancer, Stamets’ life has been deeply affected by magic mushrooms and he is determined to spread the spore message worldwide.

When you look down, you find mushrooms

Afflicted with a stutter, the young Paul Stamets was shy and reserved. So much so that he avoided looking people in the eye and instead stared at the ground. And what did he find there? Mushrooms.

Stamets was fascinated by the unique colors, shapes, and uses for fungi, as well as its elusive nature. He soon became an amateur mycologist, spending hours in the woods studying the decomposition of organic matter and subsequent growth of mushrooms. In what could be called a turn of fate, Stamets’ interest in fungi led him to a book called Altered States of Consciousness by Paul T. Tart. At the intersection of mycology and psychology, he was hooked.

Stamets’ curiosity then led him to psilocybin – the psychedelic ingredient that gives some mushrooms their “magic” – which was being credited for its life-altering transcendental experiences. Intrigued, he decided to try it for himself. During his first trip, he spent several hours clinging to a tree branch watching a fantastic lightning storm and focusing all his effort on wishing away his stutter. And in one session, he was cured.

Needless to say, Stamets’ experience fuelled a lifelong passion for research and discovery into what else mushrooms could do. In 1980, Stamets founded his company Fungi Perfecti, which describes itself as “a family-owned business dedicated to promoting the cultivation of high quality gourmet and medicinal mushrooms.” Fungi Perfecti sells a wide variety of mushroom products including supplements, culinary mushrooms, growing kits, and even gifts.

Paul Stamets has become an icon in mycology circles for his groundbreaking research. Interestingly enough, he completed the bulk of his research without being funded by or affiliated with a university. While his path is parallel to academia, his genuine passion for mycology differentiates him from others in the field.

Stamets’ findings span a variety of research areas. In the ecological field, one of his most intriguing findings was the role of mycelium (the root-like structure of fungi) in digesting oil. In the study, multiple groups were assigned to treat an oil spill, with Stamets’ team using mushroom spores as their proposed solution. While other teams’ strategies faltered, Stamets’ team’s oil spill was not only absorbed by the mycelium, but began to thrive with plant and animal life. This seemingly small finding could have a huge impact on how governments address oil spills and other pollutants in the future.

Stamets has been awarded 19 patents, with many more pending. As he began to better understand the role of mycelium in nature, he also observed how different animals and insects react to mycelium. As a natural bio-composter, mycelium is essential to the breakdown of natural materials and their rebirth as fungi. Paul Stamets had the vision to convert this natural process into remarkably effective pesticides, which he has dubbed “mycopesticides”.

Originally formulated to eradicate pests like carpenter ants and termites, Stamets has since extrapolated his research to include what he refers to as “mycoattractants” which use mycelium to attract beneficial insects. In turn, this research was further developed to provide fungal solutions for the protection of bees. Ultimately, this stem of his research could provide relief to food scarcity concerns linked to the decline of the bee population worldwide.

Fungi are the grand recyclers of the planet and the vanguard species in habitat restoration.

Stamets’ patents aren’t limited to attracting and deterring insect populations. Several of his pending patents are linked to his innovative research into antifungals to fight illness in humans and, of course, his research into the role of fungi as a mental health and wellbeing product.

Stamets’ interest in fungi as a healthcare product became personal in June 2009 when his mother was diagnosed with late-stage breast cancer and given three months to live. Paul’s company, Fungi Perfecti, was already supplying turkey tail mushrooms for clinical cancer trials and his mother was soon accepted into the study. Along with other cancer treating drugs, Stamets’ mother was taking mushroom capsules several times a day to boost her chances of responding to treatment. Astonishingly, Stamets’ mother beat the odds and survived her cancer. Five years later, she was still cancer-free and the only survivor of 50 cancer patients receiving the drug Herceptin. Her survival is credited to the addition of the turkey tail capsules, which suppress the body’s inflammatory response.

Stamets’ involvement in the use of mushrooms for medicinal purposes also led him to vouch for the safekeeping of our forests. Mycology is inevitably linked to environmental preservation. Without the appropriate growing environment, new species (or old, undiscovered species) of mushrooms cannot develop. The richest soils and largest networks of mycelium are found in old-growth forests, which are constantly under threat of logging. Stamets has called for greater protection of the Earth’s forests that house rare and likely never-before-seen species of mushrooms. If the old-growth forests were leveled, we could potentially lose key ingredients for life-saving medicines. Stamets’ conviction was quoted in the film Fantastic Fungi: “We should save the old-growth forest as a matter of national defense.” He has warned that failure to do so could be catastrophic.

Apart from the medicinal implications, Stamets has also called for the protection of forests for further research on mycelium. Studies have found that plant matter can “talk” to each other through the root-like networks of mycelium on and below the forest floor. Research data has shown how trees respond intelligently to threats by rerouting resources and protecting their young seedlings. They can also store and share carbon through their root systems, which could have implications for CO2 emissions and impact our response to global climate change.

Thoughts and theories on magic mushrooms

One especially thought-provoking theory that Stamets has backed is that psilocybin mushrooms were the key to human evolution. Originally proposed by Terence McKenna, the Stoned Ape hypothesis seeks to answer how human cognitive function ballooned to twice its capacity in an extremely short timeframe roughly 200,000 years ago.

The hypothesis posits that early humans tracking animals for food would likely have come across psychedelic mushrooms growing out of cow droppings. Hungry, the hunters would have ingested the magic mushrooms, along with the psilocybin they contained. The resulting trip would have been staggering for an early human, opening their mind to patterns, connections, and ideas previously unimaginable.

While unconfirmed, the Stoned Ape hypothesis is a reasonable answer for the quick expansion of early human cognition. Art, the calendar, tool building, and even language are proposed to have emerged in this cognitive boom. We could owe our entire evolution as a species to magic mushrooms.

From this hypothetical origin, mycologists like Paul Stamets have suggested many applications for psilocybin, especially in mental health treatments. Studies have been conducted on psilocybin’s role in treating post-traumatic stress disorder (PTSD), addiction, depression, and anxiety. The success of many of these studies is credited to psilocybin’s ability to not only bring joy to the user and alter their way of thinking in the long-term, but also to establish new neural pathways in the brain that physically reflect those cognitive changes. It literally rewires the brain in a beneficial way. Best of all, a single treatment can have lasting positive effects for months.

These research findings have enormous implications for mental health services, but can also be beneficial outside of clinical settings. Psilocybin’s ability to pave new pathways in the brain and fuel creative thinking has made it a popular choice for artists, business leaders, and other creatives. A single trip has been touted to cure writer’s block, inspire studio albums, and motivate unique product launches.

With such a deep-rooted history in the human condition, it seems that psilocybin mushrooms have endless possibilities as a holistic medicine. For those who may be averse to the traditional “trip”, psilocybin has also become a popular microdosing ingredient. Consumers can buy capsules containing small, carefully measured quantities of magic mushrooms as a daily or as-needed supplement. Microdosing provides the same cognitive benefits of enhanced neural pathways, improved focus, balanced mood, creativity, and an energy boost, while still maintaining control. 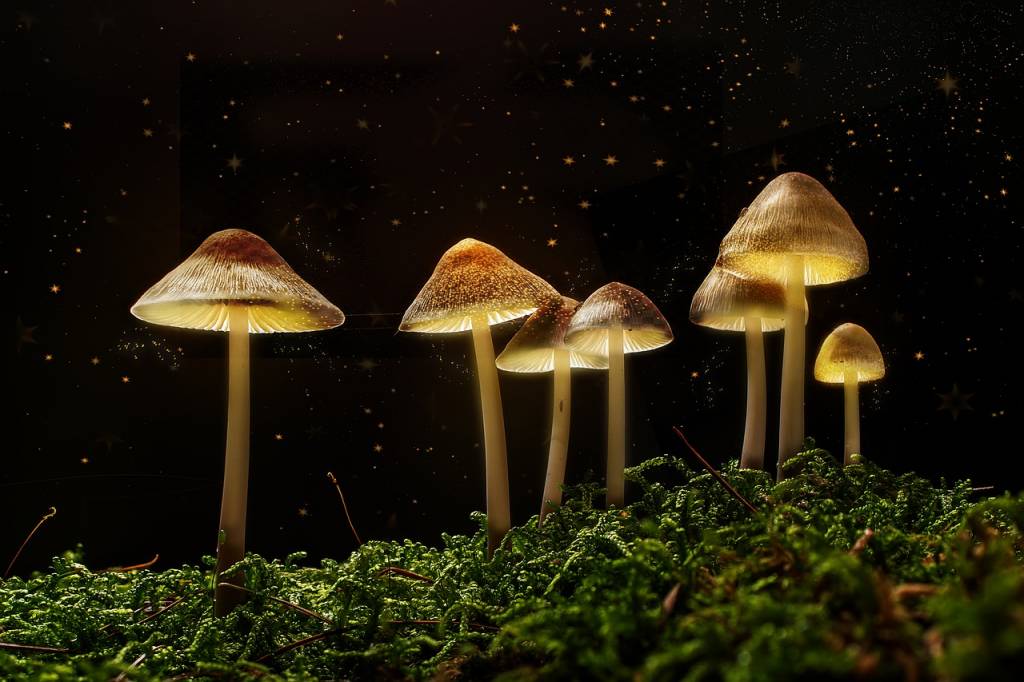 Fighting for a mushroom-friendly future

Paul Stamets became the modern champion of magic mushrooms through his dedication to publicity. Most of the world still holds many misconceptions about mushrooms and their impact on our ecosystem and our lives. Stamets faces critics head on with undeniable research and spreads the mushroom message every chance he gets.

Stamets is a prolific author with over 40 publications to his name. The majority of his publications are peer-reviewed scientific journals and research papers, many of which are linked to his patents.

Outside of academia, Stamets has also published six books on mycology for the education of the public:

Paul Stamets has been celebrated for his achievements and contributions to mycology with many awards from prestigious institutions. Some notable inclusions are the Visionary Award from National Geographic Adventure Magazine in 2008, an honorary Doctor of Science degree from The National College of Natural Medicine in 2012, and the Award for Contributions to Amateur and Professional Mycology from the North American Mycological Association in 2013.

Beyond his own contributions, Stamets is dedicated to passing along a curiosity for mycology to future generations. He frequently employs students for his research projects and is a heavily sought-after keynote speaker for psychedelic, medicine, and mycology conferences. Stamets also delivered a top-ten ranked TED talk in 2008 entitled “6 ways mushrooms can save the world”, which has amassed over 8 million views on the TED website, and many more on YouTube.

A key takeaway from Paul Stamets’ body of work that is often overlooked is his drive for a societal shift in how the world views fungi. Certain governments and pockets of society have begun to embrace the beneficial qualities of mushrooms, but there is still a long way to go. Mushrooms are still shrouded in stigma leftover from the “war on drugs” era, which mistakenly included natural medicinals like fungi in the ban of synthetic, addictive drugs like opiates.

Stamets’ research has clearly demonstrated that mushrooms have the potential to solve many of society’s problems in a holistic, natural way. However, the decriminalization and de-stigmatization of psilocybin and other mushroom-based products is essential for the research to be further developed into marketable treatments for the general public.

Today, “The Mushroom Man” remains dedicated to advocating for all things mushroom.

If you are interested in researching magic mushroom spores, please check out all the awesome new varieties here at Mush Love Genetics.